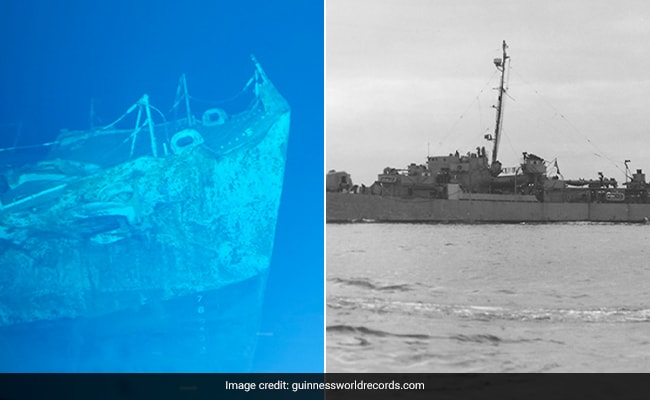 The remains of a US Navy ship discovered last month by explorers, has broken the world record for deepest shipwreck, according to a release by Guinness World Records (GWR). The ship – John C Butler-class destroyer USS Samuel B Roberts – was lost during the Second World War.

Sunk in the Philippine Sea during WWII, it was found recently with live ammunition still onboard ????https://t.co/0MH2nVL3Wb

The Navy ship was found 6,865 metres (or 21,521 feet) below the sea’s surface, near Samar, the Philippines’ third-largest island.

The Battle of Leyte Gulf, the largest naval engagement of World War II that took place in October 1944, was fought in the Pacific War and involved the destroyer. A far smaller US navy that later invaded the Philippines defeated the Japanese naval force.

The US Navy ship lies nearly as far below sea level as the highest mountain in South America, Aconcagua, according to GWR. In another comparison, the vertical distance is equal to eight Burj Khalifas, the highest skyscraper in the world, or a stack of 20 Eiffel Towers, the record keeping body further said.

The Johnston was a member of the same task force as USS Samuel B Roberts. On October 25, 1944, both fell during the brutal War off the coast of Samar.

According to some nautical historians, this was the biggest naval combat ever fought because it was a flashpoint in the larger Battle of Leyte Gulf, which was fought near the end of World War II between the US and Japanese navies.