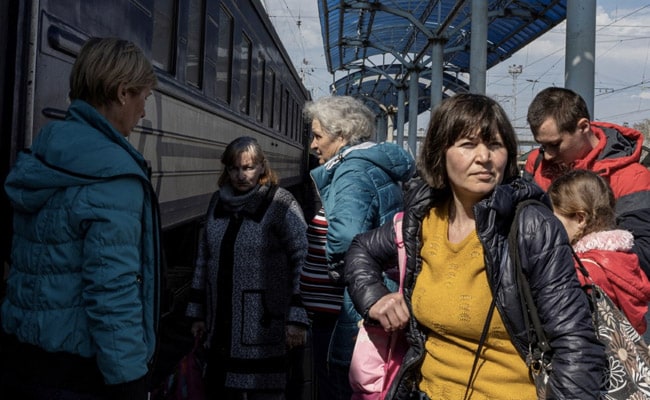 A salvo of missiles brought the Kremlin’s war on Ukraine to Fastiv, a quiet town abounding with flowering cherry trees and set in sweeping farmland hundreds of kilometres from the front lines.

The strike on April 28, which injured two people, hit an electrical substation that feeds power to a confluence of railway lines that forms a key hub of networks linking central Europe, Russia, and Asia.

The damage quickly was repaired, said Ukrainian officials, and a Reuters visit last week revealed no lingering impact. Trains plied between Kyiv and the southern port of Odesa, disgorging passengers into the station at Fastiv, a town of 45,000 people 75 km (45 miles) south of the capital.

Officials said the attack was part of an escalating Russian assault on infrastructure, aimed in part at paralyzing rail deliveries of Western-supplied arms and also reinforcements sustaining Ukrainian forces fighting in the east and south.

“The longest delay we’ve had has been less than an hour,” said Oleksandr Kamyshin, 37, a former investment banker who keeps the trains running as the CEO of the railways, Ukraine’s largest employer.

The Russian defense ministry has said Ukrainian facilities powering the railways have been targeted by missile strikes because trains are used to deliver foreign arms to Ukrainian forces.

The rail system is being hit not just because it is critical to military supplies, Ukrainian officials said.

Moscow’s “goal is to destroy critical infrastructure as much as possible for military, economic and social reasons,” Deputy Infrastructure Minister Yuri Vaskov said in an interview.

With Russian warships blockading Black Sea ports, downed bridges and checkpoints obstructing roadways, and a fuel crunch snarling trucking, Ukraine’s 22,000 km (14,000 miles) of track are the main lifeline of the struggling economy and a passage to the outside world.

Trains have evacuated millions of civilians fleeing to safer parts of the country or abroad.

They have begun running small grain shipments to neighboring counties to circumvent Russia’s maritime blockade. Ukraine was the world’s fourth largest grain exporter in the 2020/21 season and exports disrupted by the war have interrupted global food chains and helped fuel worldwide inflation.

Internally, trains are distributing humanitarian aid and other cargoes. They enabled the restart of the AcelorMittal steel plant, in Kryvyi Rih, by bringing workers in and product out, said Kamyshin. They carry civilian casualties in hospital cars staffed by Doctors Without Borders.

Since Russia invaded on Feb. 24, he said, trains have distributed more than 140,000 tonnes of food and will have carried some 1 million kilos of mail for the state postal service by mid-May.

Russian attacks on some of the 1,000 stations have killed scores of civilians, including dozens killed in an attack in April in the station in the eastern city of Kramatorsk.

That has not deterred passengers.

Daily ridership has reached as many as 200,000 passengers, Kamyshin said in an interview on Saturday as he rode a train across a bridge that had been repaired after being badly damaged during Russia’s failed advance on Kyiv from the suburb of Irpin.

Nor have the railway’s 230,000 personnel stayed home even though 122 have been killed and 155 others wounded on the job and in their houses, said Kamyshin.

Moscow denies striking civilian targets in what it calls a “special military operation” to disarm Ukraine and rid it of what it calls anti-Russian nationalism fomented by the West. Ukraine and the West say Russia launched an unprovoked war of aggression.

Reuters was not able to independently verify the assertions of Kamyshin and other Ukrainian officials about their successes keeping the railways going in wartime.

Helena Muskrivska, 56, the Irpin station master, said she worked for the first four days of the Russian assault, helping evacuate some 1,000 people and relaying local developments by landline to Kyiv. She took documents and equipment home when it became too dangerous.

“I was here when the Russians came into the station. I didn’t want to see them face to face,” said Muskrivska.

“There’s a lot of fundraising efforts everywhere for Ukraine, but none of it goes to the railroad,” said Jolene Molitoris, a former U.S. Federal Railroad Administration chief who chairs the group. “It is the lifeline of the country.”

The group also aims to fund purchases of heavy machinery, rails and other equipment sought by the railways.

Kamyshin said he is racing against the Russian attacks, deploying teams of workers and dispatchers around the clock to fix tracks and reroute trains. “It’s all about hours, not about days.”

He and top aides constantly move, taking trains to inspect damage and repairs around Ukraine, he said, adding: “Once they break it, we fix it”.

Kamyshin said his top priority is redirecting grain exports from Ukraine’s southern ports to Poland, Romania, and the Baltic states to help revive the economy. He said Russia would remain a threat even after what he called its inevitable defeat.

“This crazy neighbor will stay with us,” he said. “No one knows when they will come again.”