When it came time for the 2022 American Music Awards to celebrate the legacy and impact of Lionel Richie, it took multiple superstars – including one of Lionel’s fellow icons. Charlie Puth and Stevie Wonder kicked off the tribute to Lionel, 73, this year’s recipient of the Icon Award. Stevie, 72, and Charlie, 30, teamed up for a medley of Lionel’s hits, turning the Microsoft Theatre into the biggest piano bar in Los Angeles. The two each took a turn playing a snippet of a Lionel Richie hit, showing the man’s impact throughout the decades. The tribute ended with “We Are The World,” and everyone in the theatre joined.

Some of the night’s biggest stars — like Ari Lennox — came out to sing, and Lionel couldn’t help himself. He jumped on stage and joined in.

#AMAs King Stevie redeemed himself with the We Are The World sing-along because I know at one point Lionel was looking like Da F 🥴😳. There was no one else who could’ve done the tribute??? 😂😂😂. #AMAs pic.twitter.com/ZAMfwJoNTC

Linda homenagem ao #lionelrichie no #AMAs cantando “We Are The World” 🥺 pic.twitter.com/2Ct0Y520gv

“I started out here, at the AMAs, and my career, to this day, forty years later, I’m back at the AMAs,” said Lionel when accepting the Icon Award, who thanked Dick Clark, before thanking his kids – Sofia Richie, Nicole Richie, and Miles Richie – and their mothers, for helping raise them.

Smokey Robinson, the first host of the AMAs back in 1972, said he was “honored” to present the award to his “brother,” Lionel Richie. From there, audiences were treated to a retrospective of Lionel’s career, from his time with the Commodores, to his breakout as a solo artist.

The AMAs announced in early November that Lionel would receive the Icon Award at the 2022 ceremony and make history as well: with his 2022 performance, he becomes the only artist to be featured on the AMAs stage every decade since the show’s creation in 1974 (per Billboard). The Icon Award is his 18th overall AMA, with his first two coming with the ban, the Commodores, and the rest won as a solo artist. In 1984, Richie was the first to host the AMAs by himself. The following year, he returned as the host and won a then-record six awards that night.

“I’m immensely grateful for a career that has taken me to places I never imagined that I’d go, from arenas worldwide to studio sets to the AMA stage,” Lionel Richie said in a statement about the Icon Award. “I can recall one of the first times I got to perform at the AMAs. It was to sing ‘We Are the World’ among the most iconic musicians of my generation, so it is surreal to be receiving this recognition 36 years later.”

Wizkid: 5 Things About The International Superstar Performing For The First Time At The AMAs

“Lionel Richie has had a profound impact on countless people around the world and on the music industry as a whole,” executive producer and showrunner Jesse Collins said in a statement. “From the millions of dollars raised due to ‘We Are the World’ to the global influence his unique sound still has today, Richie is the definition of a living legend, and honoring him with the AMAs Icon Award is a no-brainer.”

This performance will cap off a banner year for Lionel. In 2022, Lionel was inducted into the Rock & Roll Hall of Fame as part of the Class of 2022, which included Eminem, Dolly Parton, Carly Simon, Eurythmics, Duran Duran, and Pat Benatar. 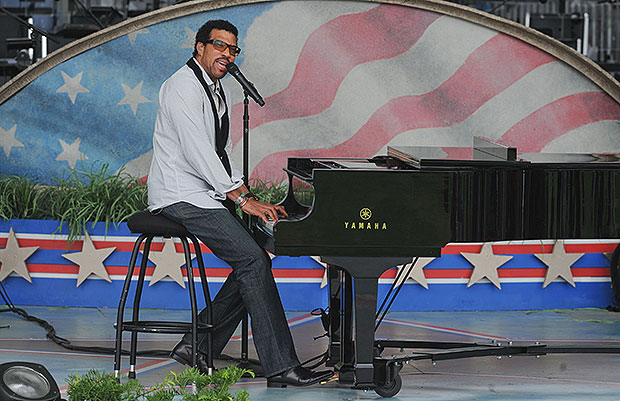 Lionel Richie (Alexis C Glenn/UPI/Shutterstock) “I must say also that there are people that have actually had to tolerate quite a bit,” he said in the speech, admitting he preferred tour life over domestic life. “Sometimes when you fall in love with the music business, you tend to fall out of love and people don’t understand what the hell you’re doing over. I missed 25 years of pep rallies, bonfires, and family reunions.”

From there, he thanked his three children – including Sofia Richie and Nicole Richie – before adding, “I want to thank them for actually sitting through my magical mystery tour. And I want to let everyone know that I am probably not coming home for quite a while. I’m in love with this business. I love what I do. Thank you so much for this amazing moment.” (h/t Vulture)

Here’s how to use Lensa, the chart-topping app that uses AI to transform your selfies into digital avatars