In his long and illustrious international career, Mike Hussey has featured in several big-ticket games for Australia. But when the second semifinal of the T20 World Cup gets underway between India and England at the Adelaide Oval on Thursday, it will be a different experience for ‘Mr. Cricket’.

Being the assistant coach of England for the tournament, Hussey knows that for players of both the teams, it will be a massive challenge. While he admits that the team which can avoid distractions will have the edge, Hussey also hopes for England batters to come good against a powerful Indian team.

After initial jitters, England bounced back in the tournament, defeating New Zealand and Sri Lanka to storm into the last-four stage. When the team starts training on Tuesday after a small break, Hussey wants to make sure he passes on all the necessary information about the conditions at the Adelaide Oval.

“The boys are pretty relaxed,” he says on Monday evening. He doesn’t forget to mention that with Virat Kohli and Ben Stokes getting back their rhythm, an exciting game will be in the offing.

In an exclusive conversation with Sportstar, the former Aussie batter talks about Kohli and Rohit Sharma’s form. Additionally, he also reveals he is looking forward to watching the Chennai Super Kings play its home matches of the Indian Premier League next year at the MA Chidambaram Stadium in Chennai amid a ‘sea of yellow’.

Being the assistant coach, how has your experience been of working with this England team?

It’s been a really enjoyable tournament so far. England has been a very good team to work with. I really enjoyed the experience. It’s been a tough tournament, there’s been challenges along the way, due to weather and tough conditions and obviously tough teams. All the teams have been tough especially in our group.

It has been challenging from that point of view and I know that the team is really excited about getting through to the semifinals. Wow, what an occasion it will be to be able to play India at the Adelaide oval on Thursday! It will be a sensational occasion.

160 has been a par score at the Adelaide Oval in the tournament. Going into the semifinal, how do you want England to approach the game? Has there been any discussions yet?

Not yet. We’ll start training tomorrow, so we’ll start all those conversations then. We just had a couple of days break after the game against Sri Lanka, just to refresh. So, we’ll definitely be having a chat about the pitch, outfield and any other local knowledge I can pass on.

England suffered a shock loss to Ireland a couple of weeks ago and that was followed by a washout against Australia. How did the team handle the situation and bounce back?

There was never any panic, especially after a few tough games early on and the washout. It hasn’t been easy for the top line of batters, when we played the first game in Perth It swung and seamed a little bit.

In Melbourne, the ball was moving around a lot. So, it hasn’t been easy for the top of the order to get off to a flier. But they are experienced players and they know their game well. We’ve got a lot of faith in them that they will come through and put in some match-winning performances. They have played really good cricket in the last few games. 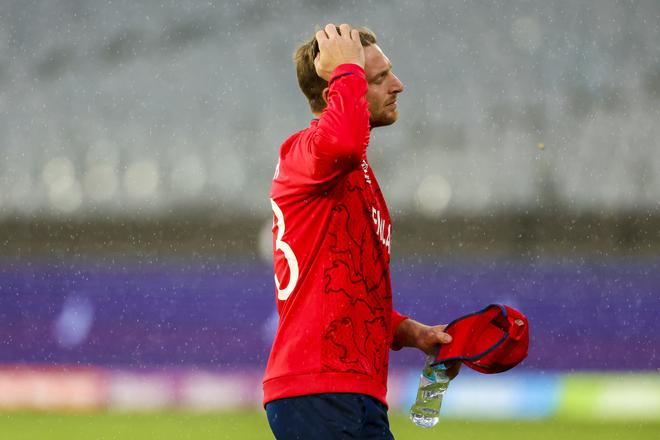 Being a former cricketer, how do you assess Australia’s performance in this edition? What do you think went wrong?

Probably the first game against New Zealand really hurt them from a net run rate perspective. That sort of dented their confidence a little after losing the game by so much (89 runs).

But other than that they have played okay. It’s a tough tournament and all the teams are pretty strong. And they did well to sort of bounce back after that.

But it’s just little things with T20 cricket that if they go against you, then you can find yourself out of the tournament pretty quickly.

If they go for you, you can find yourself getting through to the semifinals. Of course, they’ll be disappointed, there’s no question about that. But sometimes it’s a very fine margin between success and failure.

There are lot of discussions over the future of Aaron Finch and David Warner, who struggled in the tournament…

It can happen. It’s been difficult for top-order players so far in the tournament to get going because the conditions have been challenging. The ball has been moving around quite a lot. I think both those players have been absolute champions of Australian T20 cricket over a long period of time and certainly deserve the time to make the decision themselves.

I think they’ve heard that right. Australia doesn’t play T20 cricket again until sort of later next year, so they won’t be rushing into it. They will probably see how this year’s edition of the Big Bash League goes and various other leagues around the world. See if there’s any other players that can emerge, but I still think if they are willing to put in the work and are still hungry to play at the highest level, then I still think there’d be a role for them to play.

Both Australia and England have found two very interesting middle-order batters in Liam Livingstone and Tim David. They have a similar kind of approach. How do you see them going forward?

Without doubt they are very talented, and that’s probably the part of the game that’s improved a lot. The power-hitters seem to be getting better and stronger. Once they get in, they are very difficult to stop and that’s why you’re always nervous when you’re playing a game and they’re still at the crease. The game’s never safe until they’re out. And they can score so quickly. They are quality talents and you’re always nervous when they’re playing against you.

In the semifinal, England will have to tackle Suryakumar Yadav, who has been in red-hot form. What are your thoughts on Suryakumar’s current form?

He’s been sensational and has been doing it for a number of years in the IPL. And now to do it consistently at the highest level, it’s great to watch. Personally, love watching him bat. Obviously, I hope he doesn’t get a big score against England on Thursday (laughs). But India are a fantastic team, and we knew that coming into the tournament. We have to be very close to our best to really challenge them and win the match. And maybe, it’ll just be one or two little things. Whether they go for us or they go against us could be the difference between winning and losing the match.

It’s going to be a great spectacle — two fantastic teams and they’ll both be going as hard as they possibly can. It’s the World Cup semifinal, and that prize to make it to the final at the MCG is pretty motivating. So, it should be it should be a great contest.

For India, Kohli has been in rhythm, while captain Rohit has failed to get going. Similarly, for England, how much of a relief is it to see Stokes finding his touch ahead of the big game?

Well, that’s the thing about those special players. You’ve Rohit Sharma, you’ve Virat Kohli, Ben Stokes. They seem to perform when the team needs it most. That’s quite often something that can’t be taught. It’s just, something inside them. It’s a special quality that these players have. And we have certainly seen that with Virat for a number of years.

We’ve seen it with Rohit Sharma over the years as well. And we’ve seen it with Ben Stokes. It’s almost like they crave the real pressure situations or it’s just that they just crave those big moments in games and they thrive on that. We saw with Ben Stokes the other night against Sri Lanka. The team was in a bit of trouble and he sort of coolly worked his way through.

We saw Kohli’s innings against Pakistan at the start of the tournament. That was unbelievable to watch. And for Rohit, you’re always waiting for the time that he’s going to play that sort of special innings as well. Let’s hope, it’s not on Thursday, but we know how good he is (laughs).

How challenging will it be for the players to hold their nerves ahead of the big game?

It’s huge pressure. But these guys are experienced players and they’ve been in these big games before. And they’ve got a great ability to just play the game that’s happening right in front of them. It seems like everyone else, all the fans and the commentators, they get sort of distracted by all the external things like the pressure of the game, or the scoreboard, or what the pitch is doing or if you win or lose. They’re all external distractions for the players.

The players rarely focus on those sorts of things. They just focus on eyeing that next ball that’s right in front of them and that’s all they can play. And then they get very good at doing that over the years. So yes, of course, it’s a big game, but every game is a big game in a World Cup. You have to win every game. It’s going to be the team that can hold its nerve and not get distracted by external stuff that will probably come out on top. 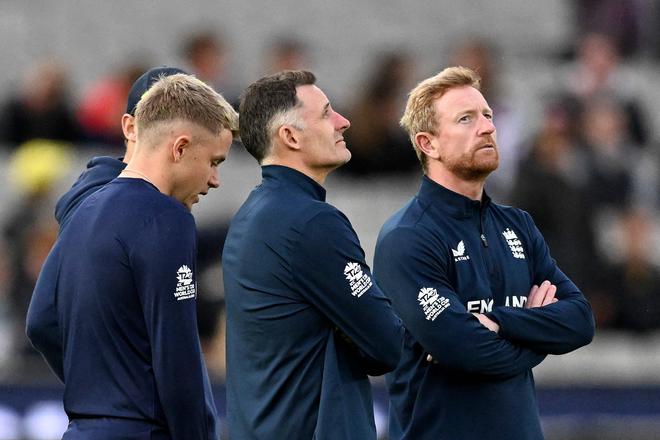 England assistant coach Michael Hussey (C) waiting for the rains to relent during the match against Australia. The match was eventually abandoned without a ball being bowled.
| Photo Credit: WILLIAM WEST

In this edition of the T20 World Cup, a lot of smaller teams like The Netherlands, Zimbabwe, Ireland have impressed. Do you think that going forward, these teams should be given more opportunity to play at the higher level with top teams?

I’ve been impressed with lots of the players from these less prominent teams. And it’s fantastic that they’ve got the opportunity to play in this World Cup. And I think what’s been a really good initiative is that the top four from each group automatically qualify for the next World Cup. So it’s a great opportunity for Zimbabwe, Ireland, Netherlands to sort of jump up into that top four, which means they don’t have to go through the qualification stage next time. I think competition for spots is pretty high.

Lastly, I can’t help but ask you about Chennai Super Kings. After a disappointing campaign last season, how does CSK plan to turn things around this season?

Oh, well, I love working with CSK. It’s fantastic. It’s a great environment. It’s a job I really love doing. I love the players. I love the coaching staff, I love the owners and all the staff that are working there as well. So yeah, hoping for a very strong season.

I also know (MS) Dhoni is very excited about coming back and playing in Chennai., The crowd there is just phenomenal. It’s just a great, great, great stadium to play in in front of those great fans.

Gabriel Jesus: Arsenal boss Mikel Arteta unsure how long striker will be out for after knee surgery

Wall Street says a recession is coming. One investment pro names her favorite stocks to tough it out

Cramer’s lightning round: Carvana is not a buy