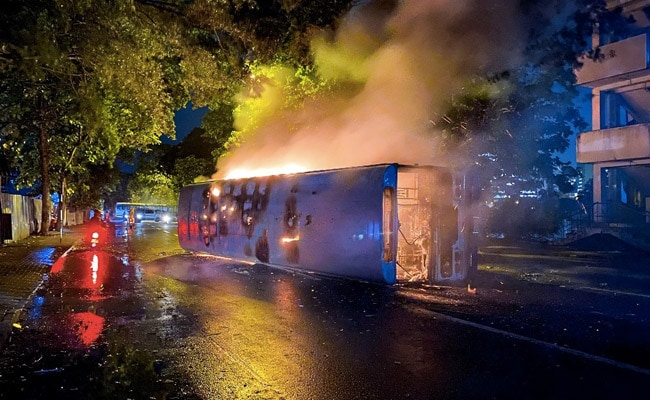 Sri Lanka’s former Prime Minister Mahinda Rajapaksa and his family have taken shelter at a naval base in Trincomalee in the north-east part of the island nation, sources have told NDTV, as lethal protests continue amid the country’s worst ever economic crisis.

The former Prime Minister and his family were flown in a helicopter to the naval base, people with direct knowledge of the matter told NDTV. They said protests have broken out outside the naval base too, some 270 km from the capital Colombo.

Sri Lanka deployed thousands of troops and police today to enforce a curfew after five people were killed in the worst violence in weeks of protests over the unprecedented economic crisis. Nearly 200 were also wounded yesterday as Mr Rajapaksa resigned, but that did little to calm public anger.

He had to be rescued in a pre-dawn operation by the military today after thousands of anti-government protesters poured into his official residence in Colombo overnight, with police firing tear gas and warning shots to keep back the crowd.

The Rajapaksa clan’s hold on power has been shaken by months of blackouts and shortages in Sri Lanka, the worst economic crisis since it became independent in 1948. President Gotabaya Rajapaksa remains in office, however, with widespread powers and command over the security forces.

Yesterday’s violence started when Mahinda Rajapaksa’s supporters — bussed into the capital from the countryside — attacked protestors with sticks and clubs.

Outside Colombo, ruling party lawmaker Amarakeerthi Athukorala shot two people – killing a 27-year-old man – after being surrounded by a mob of anti-government protestors, police said. “He then took his own life with his revolver,” a police officer told AFP, adding Mr Athukorala’s bodyguard was also found dead at the scene.

Sri Lanka: The Rajapaksa clan’s hold on power has been shaken by months of blackouts and shortages in Sri Lanka

At least 41 homes of top ruling party politicians were torched overnight despite curfews. Hundreds of motorcycles parked in those homes were also burnt.

“This is something we should have done earlier,” an unidentified man in front of a burning home of a minister told a local media network. “We are sorry we couldn’t burn it sooner.”

The protests came after the coronavirus pandemic hammered the island’s vital income from tourism and remittances, which starved the country of foreign currency needed to pay off its debt. This forced the government to ban many imports, leading to severe shortages, inflation and lengthy power blackouts. In April, Sri Lanka announced it was defaulting on its $51 billion foreign debt.

It is unclear what President Rajapaksa’s next move will be in the face of the protests, according to Akhil Bery of the Asia Society Policy Institute. Aside from following his brother in resigning, he could appoint a caretaker government — before then quitting — deploy the military and police to suppress the protests, or try to wait for them to “die down naturally”, Mr Bery told AFP.

Any bailout from the International Monetary Fund — currently under negotiation — would mean “higher taxes and less government spending, which is a politically toxic combination,” he added.