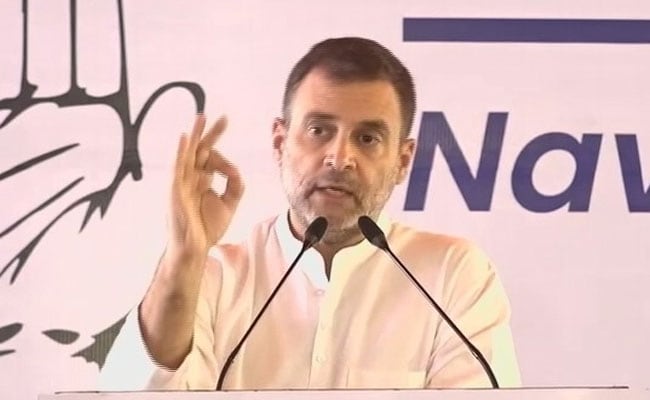 Acknowledging that the Congress’ connection with the people has been “broken”, former Congress president and Wayanad MP Rahul Gandhi announced on Sunday that the party will undertake a yatra in October to re-establish and strengthen it.

Mr Gandhi said the party has to accept the reality and work hard among the people to reconnect. “We will have to accept that our connections have been broken from the masses, but the people know that it is the Congress that can lead the nation ahead,” he said addressing over 400 party members on the concluding day of the Congress strategy meeting (Chintan Shivir) in Rajasthan’s Udaipur. He asserted that there is no shortcut to reconnecting with the people and the party will have to sweat it out. “Spend months, not just one or two days among farmers and labourers,” he appealed to party workers and leaders. He assured party members that he will himself fight against the BJP along with them. “I have never been corrupt haven’t taken any money and I am not scared and will fight,” Mr Gandhi said.

India doesn’t yet understand the consequences of muzzling expression, he warned while launching a blistering attack on the BJP and RSS accusing them of being totalitarian and dangerous for the country. He said the grand old party is criticised for allowing internal conversations as party members can bluntly tell the leadership what they feel “unlike BJP and the RSS”. In a long speech where he switched between Hindi and English, the Congress scion identified several challenges the party is facing and outlined a plan to revive and energise it.

He alleged a “systematic destruction” of various institutions was taking place.

He said there is fear that the country’s demographic dividend will turn into a demographic disaster and alleged that the BJP government was responsible for it.

Highlighting the need to strengthen itself as a formidable and primary national opposition party, he said that regional parties can’t fight like the Congress. “No regional party can fight this because this is a fight of ideologies. BJP will talk about Congress but not about regional parties as they know they have a place but they can’t defeat them as they don’t have that ideology…This is a fight to save the future of the country,” he said.

Acknowledging gaps in the party’s strategy, Mr Gandhi said if there is one area the BJP is better in is communication. He said that the BJP has a lot of money and is better at communicating with people. “We have to reform our communication and connect with the people,” he added.

Attacking the BJP-led Centre, he said that the country’s vital institutions have been manipulated and voices muzzled. The judiciary has been misled, the Election Commission’s arm twisted and the media has been silenced through threats and intimidation, he said. Mentioning the Israeli military-grade spyware Pegasus, he said it’s a method to silence and strangle the political class”.

“We have seen the devastation that the farm laws caused to the people in Punjab…Youth of this country were promised jobs but unemployment has never been this high,” he said.

“It is our responsibility to go amidst the people and make them realise that they are being divided and it’s in no way beneficial to the country. Only Congress can do it. No one in the country (from any class or creed) can say that Congress closed its doors on them,” Mr Gandhi said,

The Congress on Sunday adopted a ‘Nav Sankalp’ — a road map for wide-ranging reforms in the party organisation to make it battle-ready for the next round of assembly and Lok Sabha polls.

Around 400 leaders, including Sonia Gandhi, Rahul Gandhi and Priyanka Gandhi Vadra, are attending the Chintan Shivir called in the aftermath of the party’s five-state debacle in recent elections.

Sources said that the conclave in Udaipur will focus on a time-bound and action-oriented reform process within the party.

The Congress has adopted the one-man-one post rule with some riders following its mega brainstorming session. But the proposal for a Parliamentary Board to replace the Congress Election Committee — a key demand of the rebels — was shot down by the Working Committee, the highest decision-making body of the party.

ABOUT US
Newspaper is your news, entertainment, music fashion website. We provide you with the latest breaking news and videos straight from the entertainment industry.
Contact us: [email protected].com
© 2021,hcsaffirm.com.All Rights Reserved
MORE STORIES
Featured