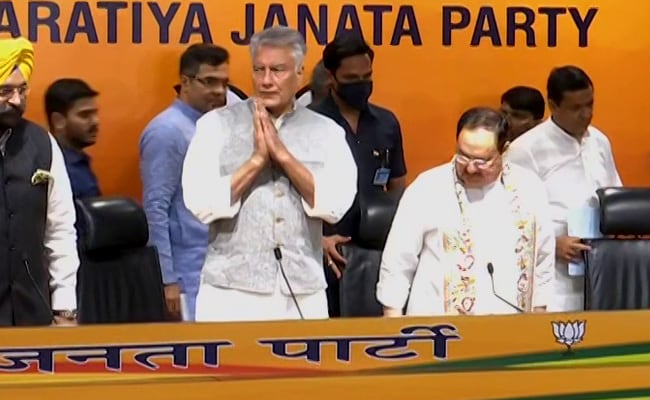 Mr Jakhar is in Delhi and has already met BJP chief JP Nadda.

Sunil Jakhar, senior Congress leader and former chief of its Punjab unit, has joined rival BJP days after quitting the grand old party. Mr Jakhar is in Delhi and has already met BJP chief JP Nadda. The former Congress leader was recently issued a show-cause notice by the Congress leadership over his criticism of former Chief Minister Charanjit Singh Channi. Sources say Mr Jakhar is likely to get a Rajya Sabha seat from Punjab and might get more disgruntled Congress leaders into the BJP.

Expressing sorrow over breaking ties with Congress, which he called “family”, he said he was sidelined because he pointed out that the party can’t treat Punjab in percentages and divide people over caste.

“I had a 50-year-old relationship with congress, my family has been with the party for three generations since 1972. I considered it family,” he said, claiming that he quit Congress, not because of any personal dispute, but “fundamental issues” with the party.

Mr Jakhar is a prominent non-Sikh face of Punjab and is respected across party lines. He holds sway over many disgruntled Congress leaders. Mr Jakhar is the BJP’s second big catch after Captain Amarinder Singh allied with BJP. He is likely to help the party in the upcoming assembly polls in neighbouring Himachal Pradesh.

In a dramatic public resignation, while the party was holding a three-day brainstorming session in Rajasthan, Mr Jakhar had said “Goodbye and good luck, Congress” in a Facebook live video after scathing criticism of former party colleagues who led the action against him.

Last month, the Congress’ disciplinary panel had recommended that Mr Jakhar be suspended from the party for two years and removed from all posts.

The five-member Committee is chaired by senior party leader AK Antony. The meeting on what action should be taken against Mr Jakhar was attended by members Tariq Anwar, JP Aggarwal and G Parameswar, besides Mr Antony.

Ambika Soni, seen as Mr Jakhar’s bete noire, was not present during the meeting.

The former Punjab Congress chief had criticised former Chief Minister Channi and termed him a liability for the party after it lost to the Aam Aadmi Party (AAP) in Punjab.

Mr Jakhar had also been critical of the party leadership for picking Mr Channi as Chief Ministerial candidate for the elections and had hit out at Ms Soni for supposedly scuttling his chances of being picked as Chief Minister after Amarinder Singh’s ouster.

Amid the crisis in Punjab Congress after Amarinder Singh’s resignation in September, Ms Soni had said she turned down an offer for the Chief Minister post and told the leadership that only a Sikh should be chosen for the job.

“You did not sever ties with me, you broke my heart, you issued a notice, were you all ashamed to talk to me? I would have given all the answers,” he had said in the live video.

Responding to Mr Jakhar’s remarks, former Punjab Congress chief Navjot Singh Sidhu had tweeted the party should not lose him. “The Congress should not loose (sic) #sunilkjakhar …. Is an asset worth his weight in gold …. Any differences can be resolved on the table,” he said.